So, without any further ado, here it is ladies and gentlemen.

The Accessibility features on the Samsung Galaxy Note 4 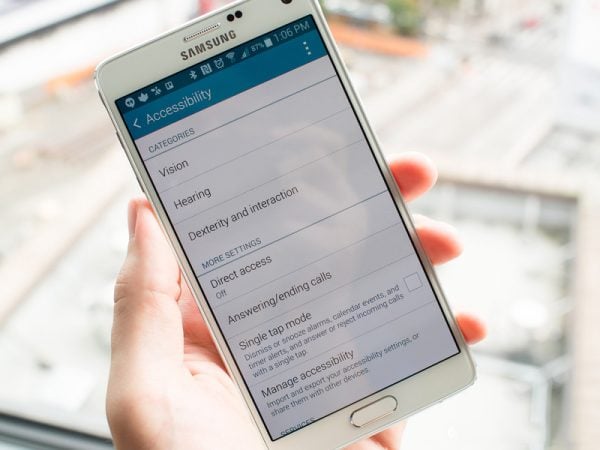 Sound Detectors – We found a feature that is similar to this one on the Galaxy S5, which was the Baby crying detector. This feature, on the Galaxy Note 4, is similar to that except that it detects your Doorbell. All you have to do, is place your smartphone within 10 feet of your doorbell, and it will send a notification to your Samsung Gear smartwatch whenever it hears your doorbell ring.

But one thing you should remember while using this feature, is that it will disable the S Voice or the Google Now always listening features.

Hover Zoom – This one is kind of gimmicky, but it does work in real life. Also, this feature is specific only to the Galaxy Note 4 because it takes advantage of the S Pen to zoom in on the content of the screen. So when you enable this feature and hover your S Pen over a certain area of the screen, it will then zoom in there. There are 3 different levels that you can zoom, namely; small, medium, large. But one downside of this feature, is that it disables Air view, Air command, Reduce Screen Size, TalkBack, and Direct pen input. But if you really need to zoom that way, then doing so through the S Pen is the best way.

Read this too iPhone 6 Design Praised By Former Android Executive

There is a huge chance that you might simply not use these features on your Galaxy Note 4 because you just might not feel that you need them. But there is a huge chance that someone else that you know, might be feeling bad for their smartphone just because they haven’t yet discovered those features yet. So if you know someone who would smile because of these accessibility features on the Samsung Galaxy Note 4, then you should definitely let them know. Who knows, it could completely change the way they use their smartphone.

Also, do let me know in the comments below which features the Galaxy Note 4 is missing that you found on the Galaxy S5, or vice versa.