A new revolution has come where mobile companies have gone ahead in providing highest bit of technology to their users. In the recently launched Samsung Galaxy S5, adding to the security feature is the Fingerprint scanner/sensor. So far only three mobile devices have this feature where users could use the impression of their finger to unlock the phone and this feature could also be  used for general shopping, courtesy- Partnership with PayPal. Here’s All You Need to Know About Samsung Galaxy S5 Fingerprint Scanner feature.

What does the Samsung Galaxy S5 fingerprint scanner do?

The fingerprint scanner option in present within the Home Button. Using this feature you can not only unlock your device but you could also use it as an alternative to entering passwords. Samsung has also released the Service Development Kit (SDK) for Galaxy S5 where developers can use it to develop a more advanced feature. It will also enable application developers to integrate the feature into their applications on Google Play Store. So far the only app to integrate this feature is Paypal.

How to register fingerprints on Galaxy S5?

Here are the simple steps that you need to follow in order to register fingerprints on your device:-

-> Go to Settings and then select Fingerprint Scanner under Quick Settings.

-> To register your print, you need to swipe the finger vertically across the four dot rows and over Home Button eight times. You need to wait for the green circle to appear after each swipe.
There are eight square boxes present so every time you swipe across Home Button turn blue and slowly squares start turning green as you approach towards the end. 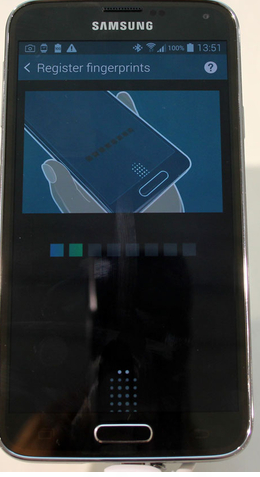 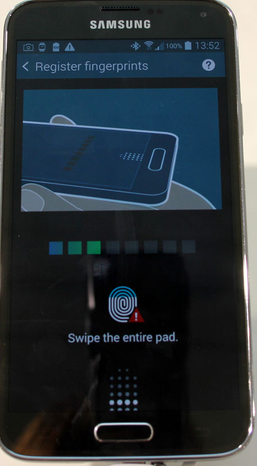 Notice in the second screenshot in which along with your fingerprint impression you have a small red triangle saying “Swipe the entire pad.” You would get this message every time your swipe is not successful or if you have not swiped the entire pad. Once you have swiped all eight times successfully, the process of registering your impression would be over and you would get a screen asking you to create a password as an alternative to fingerprint scanning.  You could choose from among the following options- Swipe, Pattern, Pin, Password and Auto Lock.

Is the fingerprints on Galaxy S5 Feature Safe?

Samsung boasts its new feature by saying that it is a highly secure feature and that it is very difficult to breach this feature and get past it without the knowledge of the user. But according to a latest news, a group of developers have proved Samsung wrong! This group of developers got the fingerprint impression of the user from his phone’s screen guard and they made it into a form a rubber pad and using that they were able to unlock the device and reached till the PayPal application where they had control over the transaction. After that incident we would recommend all our users to not to rely on this feature completely and always use passwords or 4 digit pins to unlock the device or for browsing secure apps like PayPal

This what you need to know about Samsung Galaxy S5 Fingerprint Scanner,